Home › Blog › The Problem With Fire Ants On Your Phoenix Property

The Problem With Fire Ants On Your Phoenix Property

Having ants on your property is frustrating enough, but an infestation of fire ants can be unbearable. Unlike most of their ant cousins in the U.S., red imported fire ants are highly aggressive and are capable of inflicting painful bites and stings, and in some cases, even causing death. 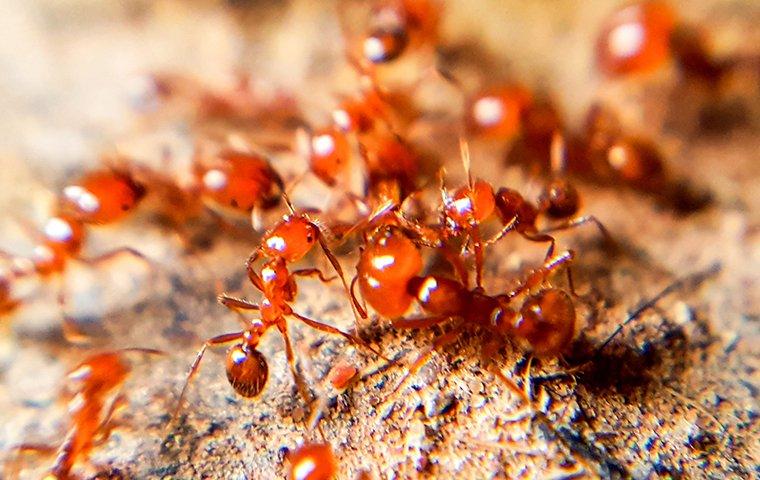 Fire ants on your Phoenix property can ruin your ability to live comfortably. Here’s what you need to know about fire ants and how to deal with them.

Fire ants, or red imported fire ants (RIFAs), are an invasive species from South America that are now pervasive throughout the southern United States. They average about ¼ inch in length and can be identified by their reddish-brown coloration and visible stinger.

Fire ants live in complex underground colonies with hundreds of thousands of members and multiple egg-laying queens. Their presence can be seen from large dirt mounds at the entrances of their subterranean lairs, which can quickly overrun your yard. If a large population of fire ants develops on your property, it can be nearly impossible for your pets or children to play safely outside.

While they prefer to nest outdoors, fire ants will gladly invade your home in search of food. Once fire ants get inside, an infestation can go from a simple nuisance to a real problem. It’s not just their red coloration that earns fire ants their name, but also their burning, fiery sting.

Fire ants are dangerous to you and your family, especially pets and small children. They are capable of delivering a potent venomous sting in addition to a piercing bite and will aggressively attack anything or anyone unfortunate enough to intrude on their territory.

For most people, a fire ant sting results in acute pain and localized swelling at the site of injection, sometimes developing into a welt or pustule. But for those allergic, a fire ant sting can be life-threatening and requires immediate medical attention. They might not spread diseases like rats or cockroaches, but fire ants can still be a serious hazard to your health.

Why Can’t I Get Rid Of Fire Ants On My Property?

You know that fire ants are aggressive and deliver a painful sting, but the worst part about a fire ant infestation on your property is how difficult fire ants are to get rid of. Fire ants build immense colonies that can stretch for acres. The sheer size of fire ant colonies makes them especially hard to control. Even if you kill off hundreds or even thousands of fire ants, there are likely thousands more to take their place.

Fire ant colonies often have multiple queens, which makes many ant control methods ineffective. Even if one queen dies, there may still be several more producing eggs for their colony. So, fire ants are often impervious to the baits and poisons that eliminate other ant colonies at the source, because fire ant colonies are usually larger and more complex than colonies of other species.

The best way to deal with a fire ant infestation is to get help from the professionals at White Knight Pest Control. For more than 15 years, our experts have been providing the best residential pest services possible to the Phoenix area. When you work with us, we will provide comprehensive treatment for fire ants with our monthly pest control plans, or we can perform a one-time targeted treatment to resolve your problems.

If you’ve got fire ants on your Phoenix property and need assistance, get in touch with our experts today for your free estimate.

“ She explained everything in detail. We knew exactly what she came out for. Very courteous and great! I would highly recommend Beth! She was great!!”