Home › Blog › What's The Difference Between Hornets & Wasps In Dallas?

What's The Difference Between Hornets & Wasps In Dallas?

You'll hear people calling wasps hornets and other people calling hornets wasps all the time; it can be very easy to confuse them. You see, it's actually a trick question. While there are many different kinds of wasps, a hornet is just one specific kind of wasp. While this can get your brain a bit jumbled, one thing is pretty easy to understand — you don't want to deal with them on your property. 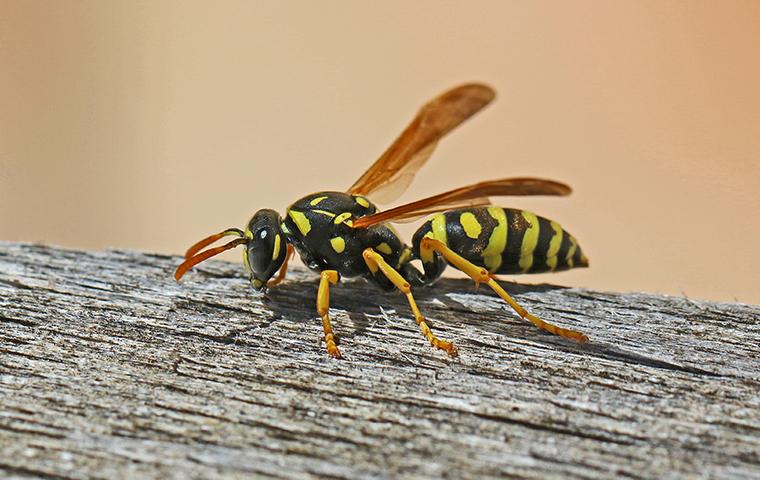 There are a variety of wasps in Texas, and hornets are one of the most common. However, you'll also witness paper wasp and yellow jacket activity on your property (also members of the wasp family). A wasp is a separate classification from ants and bees, and they usually feature a very skinny "waist" that separates their abdomen from their stinger. All wasps are very territorial and will send out distress signals when they feel threatened, which is why it can be so dangerous to try and get rid of wasp nests on your property yourself.

Another big difference from bees is that wasps can sting multiple times without harming themselves, which adds to the potential danger. So, you've got a few wasps who feel threatened, who then call dozens of their closest wasp friends in the area. A dozen wasps stinging a person a dozen times each can turn into a dangerous medical situation quickly. Both adults and children have been known to go into anaphylactic shock after being attacked by a horde of angry wasps, sometimes resulting in fatalities.

While wasps can be very dangerous, many argue that they benefit your yard in a variety of ways. Their appetite for other insects can help you out, whether you're growing crops on a farm, cultivating a garden, or just trying to get your grass greener. Wasps will wind up killing most of the small bugs that are a threat to vegetation. Many farmers even use them as natural pest control, and they'll also help pollinate your plants as they hunt for their pest prey.

So, depending on what you're trying to accomplish in the yard, maybe you want them to stick around. If you're anything like the rest of us, though, and you want to keep yourself and your family safe from a potentially dangerous situation, then you'll want to make sure that you put some preventative measures in place.

First of all, if you have spearmint plants growing on your property (those are the ones with the fuzzy white flowers), then you'll want to get rid of them. Since many insects are attracted to the spearmint plant, wasps are soon to follow. And if you're wondering if you even have those on your property, you probably do, since they're one of the most common and invasive plants throughout the United States.

On the other hand, plants like mint, eucalyptus, citronella, and wormwood will deter many wasps and bees. Other ways to reduce factors that attract wasps include:

Now, don't let that last one confuse you. Plenty of homeowners think they can handle a live nest and a few wasps only to wind up getting stung multiple times. You never want to assume a nest is empty or deserted, either, as wasps will hide inside or return shortly after the nest's destruction, becoming very hostile. If you have wasps on your property, do not try and deal with them yourself. Contact the professionals at White Knight Pest Control for more advice or assistance.

“ She explained everything in detail. We knew exactly what she came out for. Very courteous and great! I would highly recommend Beth! She was great!!”